So recently a very hyped memory corruption security vulnerability was discovered in the OpenSSL punycode parser.

Some folks including Hanno (https://twitter.com/hanno/status/1587775675397726209) asked why this is still happenning, why no one wrote a fuzzer for the punycode parser and if we as the security community have learned nothing from Heartbleed.

I think we should give the developers the benefit of doubt and assume they were acting in good faith and try to see what could be improved.

In fact, there already exists a fuzz testing harness for the X.509 in the OpenSSL source code.

All of the fuzzers from the OpenSSL source tree are also supposedly automatically deployed to ClusterFuzz via OSS-Fuzz: https://github.com/google/oss-fuzz/blob/master/projects/openssl/build.sh

Let’s start by examining the call chain for the vulnerable function.

Let's examine who calls "ossl_a2ulabel" then. 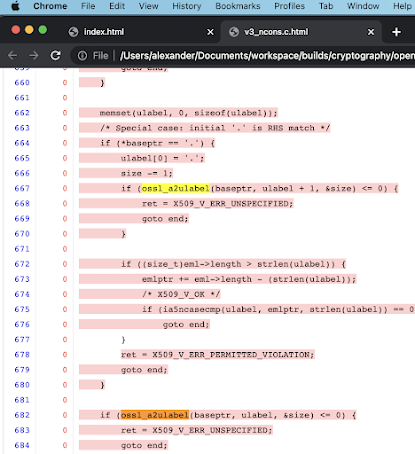 Let's remember the name of this file and examine the coverage produced by the corpus shipped with the OpenSSL source for the X.509 fuzzing harness.

Here is what I did:

So, why did this all happen?

My first (un)educated guess was: fuzzing will waste time in ASN.1 deserialization with little time spent on parsing decoded fields. Turns out, it's slightly worse.

Short answer: the code is not reachable by the current corpus and harness. As there exists an X.509 fuzzer, perhaps developers and other folks assumed it could theoretically reach all parsers, but this is not the case.

The file through which it’s reachable (v3_ncons.c) has little coverage. 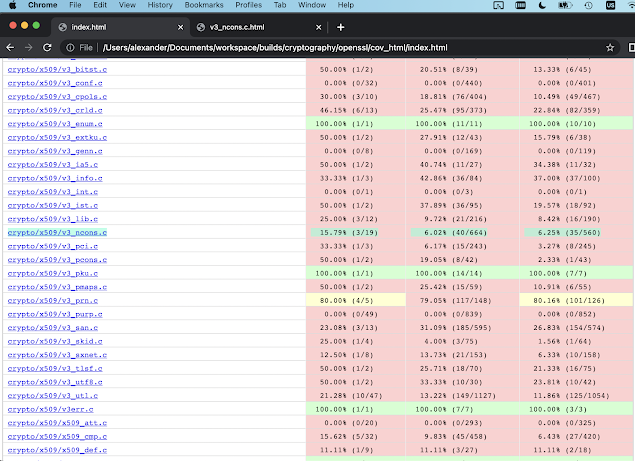 The specific call chain which we traced to "check_name_constraints" ends up in "crypto/x509/x509_vfy.c" which has ZERO coverage.

(Update): "verify_chain" is reachable in other fuzzers, but it's still not enough.

Jonathan Metzman from Google's Open Source Security Team pointed me to an OSS-Fuzz dashboard where "verify_chain" is reachable.

Unfortunately, this is still NOT enough:

I modified the X.509 test by adding some code from the "test_self_signed" function I took from "tests". With that, we can pass the "build_chain" and exercise most of "verify_chain". Unfortunately, name verification still requires a well-formed proxy certificate.
I think the way to go could be to take the code from "test/sslapitest.c", function "test_client_cert_verify_cb", use the provided certificates as input vectors and fuzz them.
Ultimately, one needs to add a custom certificate to the untrusted chain and sign the certificate to be verified with it. As one can see, it's a lot of work which requires getting familiar with using OpenSSL. 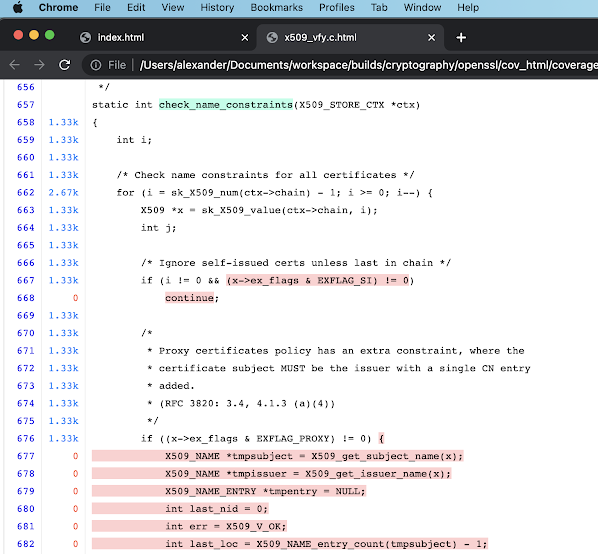 What could we try improving?

Generally, the Introspector does not always work perfectly and is easy to break - it's a static analysis tool so it gets confused by function pointers and cannot infer anything that happens at runtime, like when your code is heavily using C++ classes or a hashtable for lookups. In case of X.509 code, however, it may work fine - function pointers are mostly used by the ASN.1 code for its internals (which we actualy do NOT want to fuzz or review in most cases) whereas the core top-level logic is reachable by direct function calls from the entrypoint - a good candidate for static analysis.

If we had the harness which could theoretically reach X509_verify_cert

Hanno for his twitter thread for motivating me to look into this.

My colleagues for introducing me to the Introspector tool.