Two weeks ago I have taken some time to look at the XNU port to the ARM architecture done by the developer who goes by the handle "winocm". Today I've decided to summarize my experience.

Here is a brief checklist if you want to start porting XNU to your board:

The most undocumented step is actually using the image3maker tool and building bootable images. You have to put the to the "images" directory in the GenericBooter-next source. As for the ramdisk, you may find some on github or unpack the iphone firmware, but I simply created an empty file, which is OK since I've not got that far in booting.

Building GenericBooter-next is straightforward, but you need to export the path to the toolchain, and possibly edit the Makefile to point to the correct CROSS_COMPILE prefix

For the ramdisk, you should use the "rdsk" type, and "dtre" for the Device Tree (apparently there's also xmdt for xml device tree, but I did not try that);

Some notes about the current organization of the XNU kernel and what can be improved: 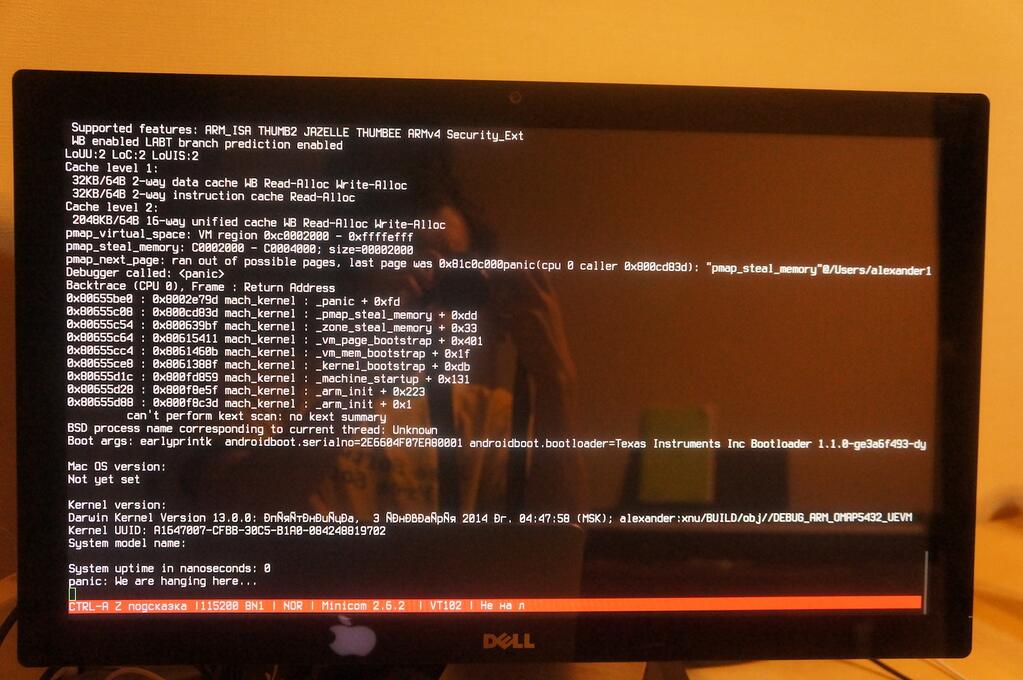 OMAP5 is an ARM Cortex-A15 core. Currently XNU port only has support for the A9 CPU, but if we're booting without SMP and L2 cache, the differences between these architectures are not a big problem. OMAP5 has a generic ARM GIC (Global Interrupt Controller), which is actually compatible to the GIC in the MSM8xxx CPUs, namely with APQ8060 in HP TouchPad, the support for which was added by winocm. UART is a generic 16550, compatible to the one in OMAP3 chip. Given all this, I have managed to get the kernel basically booting and printing some messages to the UART.

Unfortunately, I have not managed to bring up the timer yet. The reason is that I was booting the kernel via USB directly after OMAP5 internal loader, skipping u-boot and hardware initialization. Somehow the internal eMMC chip in my board does not allow me to overwrite the u-boot partition (although I did manage to do it once when I received the board)

I plan to look into it once again, now with hardware pre-initialized by u-boot, and write a detailed post. Looks like the TODO is the following:

Posted by I hate software at 2:56 AM No comments: